Find us on Millar St, Happy Valley, Fraser Island QLD On the left, just past the Retreat on the road to Lake Garrawongera.

Shearwater has been the favourite holiday destination for four generations of our family over the last 42 years. Reflecting the heart of our large family, the house is well equipped to cater for many guests, including kitchen equipment and basic supplies. The house is solar powered, with a back up generator that automatically starts when the power is low. The oven, barbecue and stove top run on gas, with instant Rinnai gas hot water supplying the house. As the house is isolated, with no access to regular cleaners, we ask that you leave the house as you found it, cleaning the house on exit. 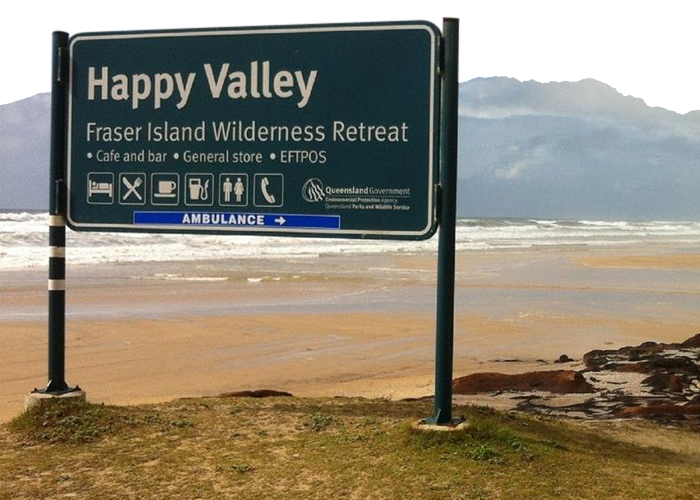 Shearwater is at Happy Valley, a small township half way up the east coast of the island. Drive up into the Valley, and the house is just past the Happy Valley Resort on the road to Lake Garrawongera. Petrol, a limited range of food, alcohol and souvenirs can be purchased from the Resort. Along with the shop, the Resort also has a restaurant and bar operating 7 days a week.

Getting to Fraser Island

The beach is the main road on Fraser Island, so a four wheel drive vehicle is essential for visiting Shearwater. Vehicular ferries run from both River Heads, Hervey Bay and Inskip Point, north of Rainbow Beach.

Take a peek inside and see why hundreds return every year.

When you stay at Shearwater you can expect to have a wonderful time outdoors and indoors, while we keep to a no TV policy to keep your focus on our beautiful place we also aim to provide your family with a home away from home feeling.

Shearwater is on a large block of land with plenty of off street parking. There is also a high pressure hose available beside the house for cleaning down vehicles after a day on the beach.

Along with an en suite off the main bedroom, Shearwater has two other bathrooms to easily support large groups.

The kitchen is very well equipped for up to 12 people. This includes picnic ware kitchen blender, coffee plunger, toaster and microwave.

There are two big fridges (one with a freezer on bottom) along with a chest freezer to store your food and beverages, and all those fish you plan to catch.

Located half way up the Eastern Beach of Fraser Island, Happy Valley is in a prime location for visitors to maximise day trips to Fraser Islands greatest attractions.

Extensive indoor and outdoor living areas and an extensive library of books, games and toys, makes Shearwater an excellent choice for all family members

ENERGY FROM SOLAR AND GAS

The house runs on solar power, with the energy stored in batteries stored on the premises, and a back up generator for rainy days. The hot water, oven and BBQ all run on gas.

LOCK BOX FOR EASY CHECK IN

The keys are kept in a lock box at the house for quick and easy checking in. The lock box code will be sent to you prior to your arrival.

Thank you for making our family holiday that extra bit special. We have loved our stay here, such an incredible home that was organised and functional. We look forward to returning to Shearwater.

Brianna
November 2019
Thanks heaps for this lovely house to stay in with so many things us kids can do. My dad caught a Kingfish at Kingfisher Bay...I loved Eli Creek but my fav place is everywhere. This place is so lovely that I am definitely going to come back again. I love Fraser Island. xoxo. And we found a swing on the sand dunes at Yidney Rocks.

43 Years Ownership By The Frith Family.

Jenny and Tom Frith, along with their 6 children: Margaret, Annabelle, Elspeth, Peter, Rachael and Emma have been visiting Fraser Island for over 45 years.  In 1976, Jenny and Tom purchased a half completed set of units, turning it into a holiday home to house their large family and all the friends that accompanied them, as they explored the island.

In the 1970’s, timber logging and sand mining was still occurring on the island. While the island was covered in tracks, none of them were sign posted. Three enormous forestry maps, with roads identified by blazes cut into trees, was the only guide the family had as they returned to the Island every school holiday period, while they explored the island and their love for it deepened.

Over the years, the house has been renovated and extended many times. Over time, the house has been opened up for renting, and has been the holiday destination for many families. It has also been a base for many fishing enthusiasts, with some groups now having returned annually for the last 30 years.

With Jenny and Tom’s family now including 17 grandchildren and 3 great grandchildren, Shearwater remains the favourite holiday destination of the extended Frith Clan.

If you have a quick question or comment please complete this short form, a Shearwater representative will reply ASAP.